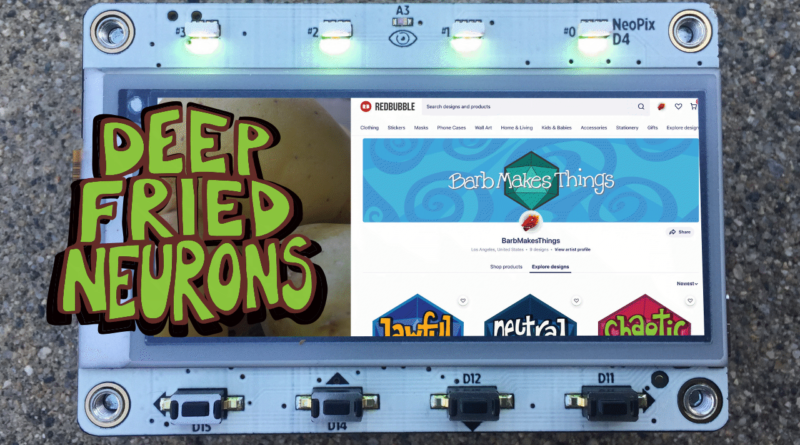 Coming up Friday at 5:30 pm PDT members Barb Noren (BarbMakesThings), Tod Kurt (todbot) and Carlyn Maw (carlynorama) on this “Special Black Friday Edition” of Deep Friend Neurons. Barb makes a store instead of going to a store. Carlyn keeps revisiting the past. Tod loves potatoes. Real potatoes. None of this Yam business.

This week, I got my Redbubble shop set up with the same nine alignment designs in my Society6 shop. I wound up making a new header for it that uses the d20 design and my pixel art dragon head, because that’s been doing pretty well as an avatar. I might even try to make more pixel art designs for the shops, because that was pretty fun to make.
Additionally, I finished two different colorings for the Arts & Crafts Supervillain cross stitch style design and put the on my society6 shop. There will be more going up on both shops. But it should be interesting to see what kind of traction (if any) my designs get on both sites. Soon, I’ll get samples from both sites so that I can make a determination on their relative quality.

Continuing on with my go-back-to-square-one approach… week 3 Barb tasked us with making magic spells. That week I made projector slides for a vintage projector as a reference to “Magic Lanterns.” This week I stole the MagTag from Tod to make “slides” for a new kind of “magic box.” The images aren’t from stored bmp files, but instead I mashed the pixels in the the display’s bitmap. Code on github. Since taking the pictures I updated the grid code (picture two) to give more of a woven effect. The very first test I wrote was an animation, but animation felts antithetical to the spirit of ePaper. The display has a slow frame rate, and, more significantly, a dramatic wipe on refresh. This new gallery of stills set up means after loading an image the MagTag can be powered off entirely leaving the image, harnessing a strength instead of fighting with it.

Tod this week had to focus on non DFN things… but he did get to make his delicious Mashed Potatoes!

Cut up 3 lbs of potatoes into pieces, the kind with thin skins so you can leave them on. Rinse them off. Put them in pot. Cover with water; bring to boil. Boil for around 20 minutes or until you can split them with a fork easily.

Drain off the water and return pot to steady surface. Add couple table spoons of butter and maybe half a cup of milk or something milk-adjacent, couple of teaspoons crushed garlic or garlic powder. 1/4 cup Parmesan cheese, and a teaspoon of black pepper.

And then MAAAAAAAASH with a hand masher.

One thought on “DFN Happy Hour No. 28: Bellies Full Edition”