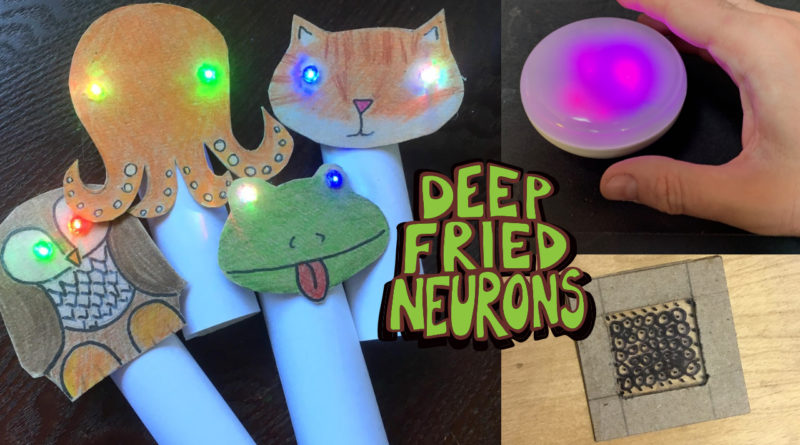 Coming up Friday at 5:30 pm PDT members Barb Noren (BarbMakesThings), Tod Kurt (todbot) and I (Carlyn Maw, carlynorama) will be streaming again. Last week we made Mental PPE (post | video) and this week we’ll explore what magic spells we could use to get us through.

We’re taking turns picking the next week’s topic and this week Barb delved into her DM skills to task us with being mages:

If you had magic and you had only one spell to help you right now what spell would it be? It could be a Harry Potter spell. It could be some kind of TTRPG, some kind of role playing spell, could be D&D could be whatever one spell, and then find some way of portraying that or demonstrating that.

Barb had to explain some of this to magical-ingenues Tod and I, but we got it in the end… mostly.

Then thinking about how cutting edge science frequently gets used as magic, especially lenses, magnets, electricity, etc. in the 18 & 19th centuries… And probably because we’ve been watching Repair Shop the idea of a Magic Lantern (Season 1, Episode 2) latched in my head so I decided to work on making my own.

A failed experiment with acrylic beads and a toilet paper tube later, I found a $16.00 1940’s projector with a working bulb and available for local pickup on eBay. That $16.00 for an adequate projector turns out to be priceless because spent way way too much time researching bulbs and light bulb codes and projector conversions.

In the end, I’m hand making slides-as-spells. I don’t have the final slide-spell ready yet, but here is proof of concept:

“To help with diffusing awkward social situations (and because everyone is entranced by blinky lights), here is a magical dazzler artifact. Guaranteed to either spark conversation or, when thrown, act as a diversion for your escape.

“The dazzler is implemented with a Circuit Playground Express running CircuitPython and a bit of magnet wire acting as the capacitive touch sensor. It’s housed in the housing of broken kitchen lightbulb”

“I’ve been playing a lot of D&D, and I went a bit nuts making a list of spells and which would be best for right now. I landed, as one should, on Find Familiar, which lets you conjure an animal familiar that you can communicate with telepathically, which follows your commands (good luck finding any other cat who will do that), and whose eyes you can see through. I figured with all of the animal options, I could see through the eyes of something flying, swimming, or skulking around and get the experience of the outdoors at least a little.

” Enter finger puppets made with paper board and questionably soldered rgb LEDs for the eyes.”