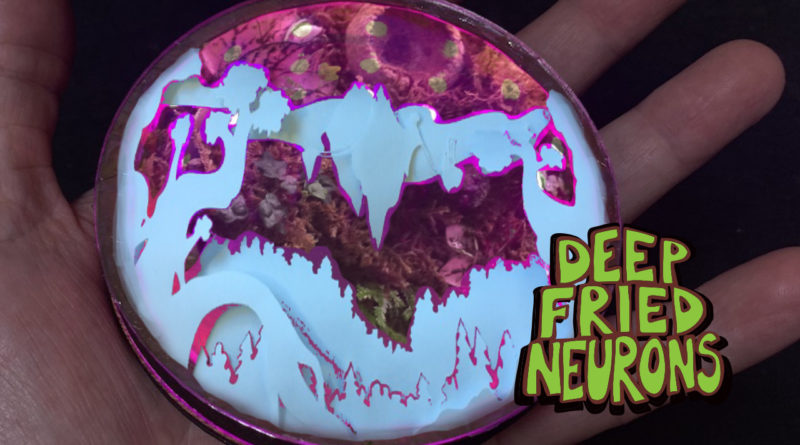 Carlyn: We’re taking turns picking the next week’s topic and this week I chose pocket universes. The claustrophobia of stay-at-home orders has been getting to me, finally. After having been very strict pretty early on because I had a (not-presumed-COVID-19) respiratory infection, now I feel like I keep hitting the glass like a bee stuck in the house. I had been thinking of going with “Stuck in Jar,” but that seemed maybe too limiting for my fellow DFN’ers partially because it dictates a mood. So “Pocket Universe” it is.

‘Pocket Universe’ has a very different feel to me than the original idea, ‘Stuck in a Jar,’ so I got distracted by a few possibilities. In the end I retreated to fixing up a couple of dead terrariums I had made over a year ago. They weren’t dead at the time. They were Sealed Temperate Moss Terrariums, that everyone says won’t work… and everyone is right. At one point I was going to leave one dead and just put a model of our house in it. That’s the mood. But plants won out.

The new plants added include:

Vivarium/Terrarium plants can be ordered online but they’re typically much more expensive. Many local nurseries will do curbside pickup (better), and have outdoor areas open with social distancing (some people are super clueless). I got these at Armstrong Garden Center, an employee-owned local chain, since I wanted to get some supplies for expanding the vegetable garden anyway. The terrarium plants were in 1.5/2 inch pots that I could divide even further. “

When the “pocket universe” topic came up, one of the first things that came to my mind was the wonderful illusion of the infinity mirror.  I love the seeming paradox of a larger space in a smaller one. Even though I know how it works, it still fills me with wonder. And in all my years of playing with LEDs, I’ve never made one!

So for my pocket universe, I wanted it handheld and self-powered, to fit in your pocket! I gave myself the restrictions: 1. No CAD, 2. No new materials (just scraps), 3. Only 3 hours. This meant no 3D printer, but I could use the laser cutter!  To do the illusion, you need one 100% mirror (bottom) and one 50% mirror (top), with lights in-between shining parallel to the mirrored surfaces. I had some scraps of 100% mirror acrylic but what to use for the 50% mirror? I ended up cutting out a circle of ESD mylar bag and gluing it to clear acrylic. It sort of works!  The rest of the case is made from scrap plywood. Gluing together acrylic and plywood means crazy-glue, which means no working time: as soon as you place the parts you are done. So the fit-and-finish of this project is really embarrassing but hey, only 3 hours!

The electronics are simple: a strand of WS2812 Neopixels hooked to a ItsyBitsy M0 and a Lipoly battery, running a modified FastLED demo. For flat projects where I want to re-use the components, I like putting female headers on boards at a right-angle: easy to change things at the expense of making it wider.

Overall it’s a satisfying artifact to hold, especially if you don’t look too carefully at the workmanship. “

I’ve done layered papercuts before, but never backlit ones, so this seemed like a good opportunity to mix the two together. I went alternate/fantasy universe with my project, so the artwork inside is of a scene from my homebrewed D&D world, on the continent of Novarun, where the party is approaching a floating city.

A little time and sanity were saved by using my die cut machine. Additionally, the box is just the right size to stick your face in. Win.

One thought on “DFN Happy Hour No. 4: Pocket Universe”