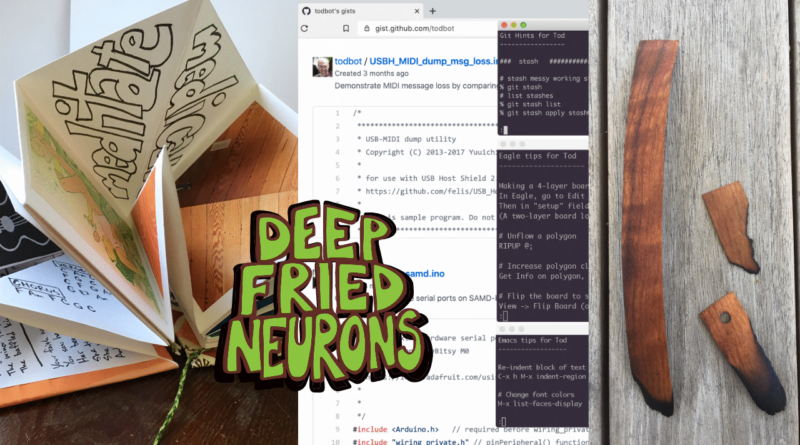 If you make a project based on any of the DFN themes or have an idea for one, let one of us know.

Last week’s blog post has been updated with some links especially called up.

Barb introduced the Remedy Book theme (video) week 5. She pulled up an article about one woman’s families remedy book. Matt Pinner pointed out that the Museum of Jurassic Technology has a whole exhibit on them. Carlyn mentioned that she had recently gotten a book Chumash Ethnobotany: Plant Knowledge Among the Chumash People of Southern California so she could plant more edibles recommended by the Chumash and the Tongva peoples. Barb also mused what a tech remedy book would look like… “Is it plugged in…” Levi recommended we look at the Voynich Manuscript. Carlyn mentioned the relationship of remedy books to insider and outsider knowledge. Barb is excited to see all the different directions we’ll take this theme.

For my remedy book, I went with a physical artifact, as I’m inclined to do. It’s a little exploding book with a bunch of pages that kinda spill out all over the place and give me a lot of spaces to work with. I decided to make it a conglomeration of different activities and ideas that kinda settle me in some way, so there are chords and lyrics I can play on my ukulele, pictures of projects that inspire me, doodles based on significant objects, random words and diagrams. It has a lot of spaces, and will be a while until it’s full. In the meantime, I’m enjoying filling it in.

This topic initially was hard for me. I was wracking my brain on what a physical remedy book was for me, but I kept returning to something Carlyn said about “even github gists could be considered remedy books”.  She was totally right and that I had tons of remedy books that I had been curating for decades. Specifically, I have been keeping “~/[thing]-tips.txt” files in my unix/macos home directory since the 1990s.  These files contain little how-tos for common tasks, phrased in a way I understand. And I refer to them constantly.
I used to have “~/cvs-hints.txt” and then “~/svn-hints.txt”. Now I have “~/git-hints.txt”.

I’ve always had “~/emacs-tips.txt” and “~/eagle-tips.txt” is now more used to help me design PCBs that work well with the Othermill.  In my password manager, I have a similar set of secure notes for working with APIs that need security tokens, like publishing to git, npm, and pypi. Finally, Carlyn was totally right in that my https://gist.github.com/todbot is full of tiny code snippets that I want to remember but aren’t important enough for a full repo. Gist.github.com is a great remedy book holder after all.

I think I was originally going to an illustrated drinks books of the beverages we’ve all been drinking. My minds been too fractured this weeek, and frankly that felt super shallow. So I did what do and returned to etymology. Looking at the roots “remedy book” could be be interpreted as the “beech wood that returns one to the appropriate measures anew“.

For me the idea of re-centering, returning to the beginning to refresh one’s self for appropriate action sounds a lot like mediation. I’ve fallen off the mediation wagon for awhile now. However, keeping oneself and community members safe from COVID-19 is a long haul task. Committing to anti-racism is a long haul task. Most things worth doing are long haul task. And when you wander off during a long haul task there needs to be a way to return. So I decided to try to make a wooden focus-object for an object meditation (not to be confused with an Object of Meditation).

I didn’t have any beech wood, but I did have some walnut strips handy. I’m still working on making them feel “sticky” enough.

One thought on “DFN Happy Hour No. 7: Remedy Books”