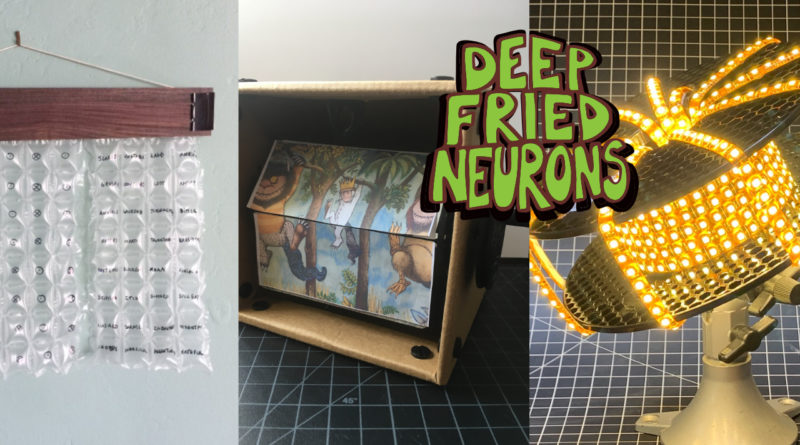 Coming up Friday at 5:30 pm PDT members Barb Noren (BarbMakesThings), Tod Kurt (todbot) and Carlyn Maw (carlynorama) will be streaming again. Last week we cataloged some “Remedy Books” (post | video) and this week we do some Mental Waste Processing.

As today is Juneteenth, if you haven’t already, it’s definitely a good night to watch 13th (free on YouTube or NetFlix)

I went through a few iterations on this. I had been thinking of making a “sharps disposal bucket” type object that could be then burned or composted, but honestly I don’t think I’d keep using it. I like the metaphor, “sharps” serve a life saving purpose… until they don’t. I also considered making some “Automatic Thoughts” Cognitive Behavioral Therapy worksheets and turning them into origami pieces after Barb mentioned kusudama during our Wednesday check in.

In the end however, both of these ideas felt more intellectual than useful. I doubted I would keep either of them up. So I thought about how I’m actually FEELING. PHYSICALLY. That failure to “drain” as Matt put it. Our body knows it’s safe because we exhale. We have CO2 sensors not O2 sensors. When we don’t exhale we stay tense, we retreat into fixed-comfort zone thinking, we can’t make room for new approaches. Changing the ratio of ones inhale to exhale can move one’s mood around pretty quickly.

We have more packing material around than usual and it seemed pandemic thematic to use it. I wanted to be able to write a feeling on the bubble wrap bubble and pop-it… but the fancy modern bubble wrap doesn’t seem to do that. I’ve made a breathing reminder / negative emotion acknowledger instead.

I was stuck on “mental waste processing”. Much of my mental waste is digital and we’ve already covered some digital tools to help with that. But from looking around my lab, there is so much *physical* waste that has been causing me mental distress. Because of the CRASHSpace PPE effort, I have a stack of empty 3d printer filament spools that is literally taller than me. Seems a shame to throw them away. It’s a really interesting shape and some of them have nice design element, like the Prusa spool has a hexagon pattern that you can see through.  I also have boxes of old dumb 12V LED strip (also stress inducing), so I figured may as well combine the two and make a lamp! Wrapping LED strip around the axle of the spool and making a toroid around the spool ended up looking pretty cool! The hex patterns of the spool let the light come through. For now a Panavise is the stand, but I think I may re-do this idea in a more permanent fashion, maybe as a series of hanging pendant lamps.

I had a hard time coming up with an idea for this prompt. It wasn’t too tough to come up with the concept of memories that you’d rather not let your brain emphasize. There are obviously experiences that you can learn from, but sometimes things just weigh you down. One way that I’ve heard of to de-emphasize them in your memory is to think instead about a good memory.

Initially, I thought about doing something with a View Master, that old slideshow toy, but I didn’t really have what I needed for that. Then came the thought of a cardboard VR viewer that shows you things to distract you, but it wasn’t really inspiring me much. Finally, I talked with Carlyn (which honestly I should have just done in the first place) and she mentioned FlipBooKits, a little flip book machine created by CRASHers Mark and Wendy, so I put together one (of course I had one on hand) and dug up pictures that reminded me of good memories. So I can crank the wheel and get a random memory to distract myself with. Eventually, I will color all over the outside of the box, because of course I will.