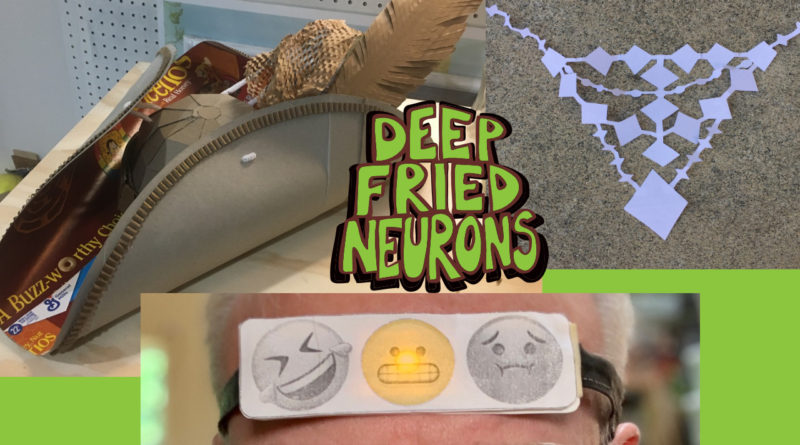 Coming up Friday at 5:30 pm PDT members Barb Noren (BarbMakesThings), Tod Kurt (todbot) and Carlyn Maw (carlynorama) will be streaming again. Last week did some Mental Waste Processing (post | video ) and this week we get fancy for the camera!

Tod announce a lighter topic:“Tiara’s and Bow Ties” theme, “something to look fancy” in video chats.

For this week’s topic, I decided to make a headband that could make it easier to for the people you’re talking to on video calls pick up on your micro-expressions. So this is an LED micro-expression to macro-expression headband. It uses a real-time sentiment analysis machine learning system to monitor your video stream to detect micro-expressions and turn them into one of three emojis to be lit up by an LED… Okay actually it’s just a CircuitPython sketch running on a Trinket M0 that reads serial port characters ‘1’, ‘2’, or ‘3’ and turns on the corresponding LED. But reading individual characters off the serial port with CircuitPython is kind of interesting.  Also kind of interesting that instead of using RGB Neopixel strip, I’m using “WWA” Neopixels that are three different color temperatures of white: warm-white, cool-white, amber. These strips emit light that’s much more “human” and work nicely as illumination. The actual build is card stock, foam tape, and a gaffer tape headband.

I’ve been having a lot of chatter with a coworker about how we might venture off in the life of pirates, so making an obnoxiously large pirate hat was a natural choice. Most of it is made from cereal boxes, with corrugated cardboard for the headband, feather, and detailing. I intend to add some more decoration at some point.

I decided to try to make an old Hollywood style necklace out of office paper, scotch tape and regular office scissors. I had considered using a laser cutter and craft paper or quilling, but I liked the idea of using standard “low” paper and basic paper-doll technique for the look. It’s a quick enough process to make a new one for every meeting.

One thought on “DFN Happy Hour No. 9: Tiaras and Bow Ties”