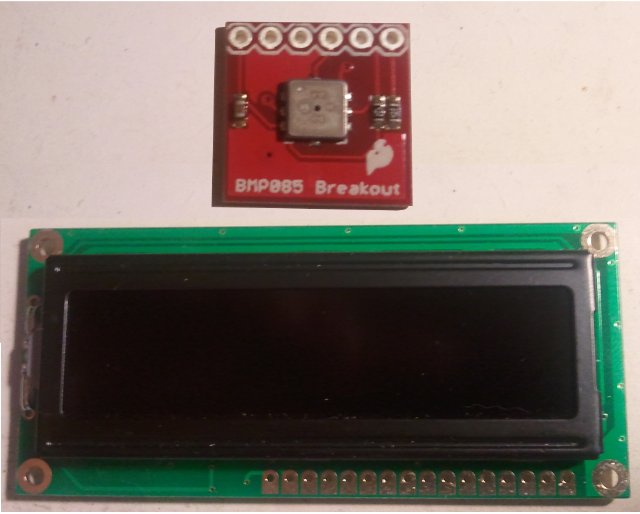 Prototyping in Hardware is a series of hands on classes focused on building your own electronic devices. Each class focuses on one or two pieces of hardware and how you would go about designing and building a project based on that hardware.

This session will focus on the ubiquitous 16 character LCD display that uses the﻿ HD44780 interface and a temperature and pressure sensor that uses I2C protocol. By the time you finish the class you’ll have built a simple weather station that displays the current temperature and barometric pressure and tells you if they are rising or falling so that you can predict the weather. This seems like particularly fitting first session giving the strange weather we’re having in Los Angeles these days.

During the class we’ll look in to the different varieties of LCD that are available and compare the data sheets so that you could source one for your project. We’ll look at the communications protocol and how you’d write firmware to support it. We’ll create custom characters for display on the LED. We’ll also examine the data sheet for the barometric sensor and schematics for the barometric sensor to see how SparkFun engineered their break out board. Since this is a 3.3v device we will also look at a couple methods for doing level shifting. Finally we’ll discuss other possibilities for you to extend the project further.

This class is aimed at folks that have basic soldering skills and know the basics of writing applications for an Arduino. If you’ve soldered wires and made LEDs blink on an Arduino you’ll be fine in this class.

You will need an arduino and a bread board. If you don’t have these we’ll have them for sale at CrashSpace.

You will receive a 16 character LCD, a pressure and temperature sensors, and a level shifter which have a combined retail value $38.85.

Register by January 9th, 2011 to reserve your spot. (CrashSpace members should use discount codes to get your discount)

Daryll Strauss is a founding member of CrashSpace. He has been working in the computer industry since 1978. He did his undergraduate studies in applied mathematics at Carnegie Mellon and a masters degree in computer science from the University of Southern California. He has taught courses at UCLA extension. He has contributed extensive to open source graphics and Linux. He currently runs a small business building systems that are used in the film and broadcast industry and builds electronics projects in his spare time.

One thought on “Prototyping In Hardware Class Jan 22rd”