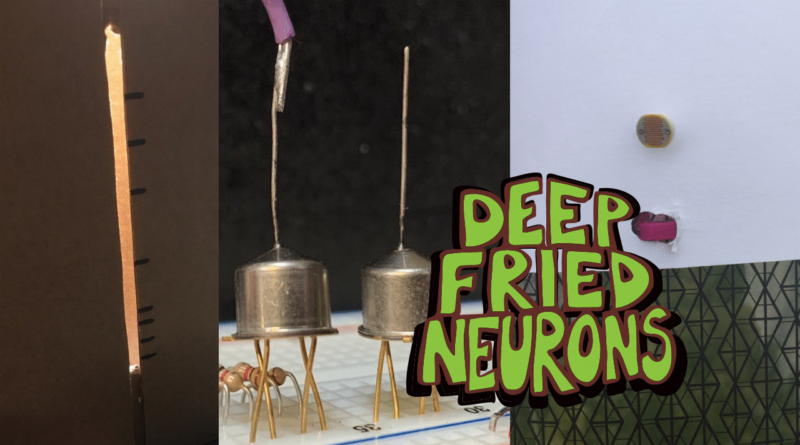 The noisy projects are here! We take our op amp oscillator circuit from last week and bring the audio chaos.

I took our circuit and built a cardboard structure to let me control the light better, and then made some marks along it to get vague ideas of where i should place a light blocking stick to get certain pitches. It could use work, but it’s also better than flying blind. 🙂

Announcing the “tiltatone”! The innovative tilt-sensitive audio oscillator! With nothing more than a wave of your breadboard, your circuit will make multiple tones!  Amaze your friends! Or annoy them at least.  This takes last week’s op amp oscillator circuit and replaces the potentiometer variable resistor with four discrete resistors in series and a 4-way mechanical tilt switch to select at what point to pick off the resistor chain.  The tilt switches are weird ones I’ve had for *ages*. I may’ve gotten them as a student. The “common” is the lead coming out the top, with four leads out the bottom, one for each tilt direction.  You can totally hear a metal ball inside.  I think one of the ways is busted though, probably why they were surplus. But so cool and weird! Here’s a small video of it in action.

This headdress pulled in work from some previous DFN experiments. It uses a leftover 3D printed visor band from the COVID-19 PPE effort, “graph paper” SVG files for the face screen, printed on transparency film like the slides. Also, card stock paper prototyping continues to be a theme. Inspired by the audio graphs talk at WWDC 2021, I wanted to use the sound as information. Also, since we have 2 Op-Amps on this chip, and our eyes are comparators too for determining distance, I making “eyes” that can see for the wearer, translating light intensity into noise.