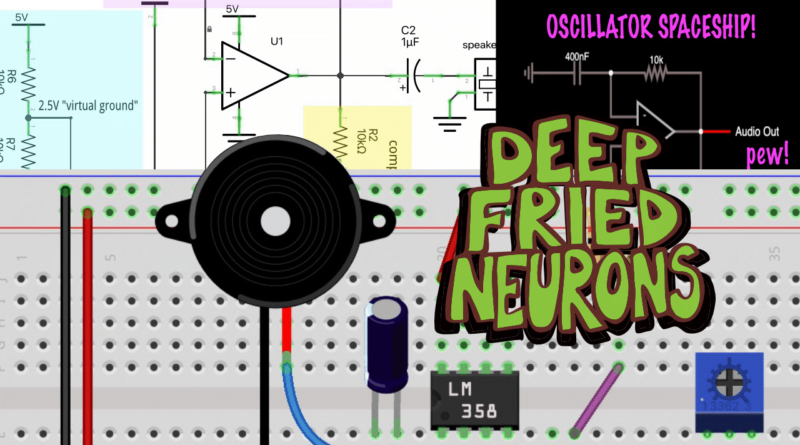 This week Tod takes the wheel to show off an Op Amp Oscillator on this next round of the DFN Happy Hour. The bloops and beeps will be legendary!

Last week’s projects used a transistor “astable multivibrator” as an oscillator. One of the problems with this oscillator design is it has two independent RC circuit timing elements. This makes it difficult to set the frequency of the oscillator. But there’s a variation of the astable multivibrator (also called a “relaxation oscillator”) that is much simpler and has only one tuning element. But it does require us to move forward a few decades in circuit design and use an op amp, aka an “operational amplifier“.

An op amp is an amazing device, especially after you’ve designed with transistors. They have two inputs, labeled “V+” and “V-” and one output “Vout”. Op amps have two power inputs, labeled here “Vs+” and “Vs-“. The two golden rules of op amps are:

The fact that op amps inputs can sense changes on its inputs without drawing current from the circuit it’s hooked up to seems magical, especially if you’re used to BJT transistor circuits. It’s like a circuit spy.

For this week’s circuit, we can reword those rules to our advantage:

Now we have all the parts we need to make an opamp oscillator:

The 400nF capacitor and 10k resistor on top act as the RC timing element. And the two 100k resistors at the bottom act as a voltage divider. The op amp is being supplied +15V & -15V for power. But wait how does this work? The two 100ks act as a voltage divider, taking whatever is at the op amp output (15V or -15V, let’s say 15V to start), divides it by 2 (7.5V), and applies it to the “+” input. At the same time, the 400nF capacitor is being charged up to via the op amp output, through the 10k resistor. All the while the op amp is comparing the “+” and “-” inputs. When the capacitor’s voltage is more than 7.5V, the difference between the inputs goes negative, the op amp’s output slams to -15V. Now the entire process begins again, but with negative voltages. Then it happens again with positive voltages. And now we have an oscillator. Just look at it go!

Simulation of circuit. Try it out yourself!

And that’s the whole circuit! Breadboarded up it looks kinda like:

The main difference is that the OUTPUT and Vs+ (aka VCC+) connections are on different pins.

You’ll notice that the output loudness is very low. This is because while most op amps are strong, they cannot drive speakers directly. But the output is perfect for the “line in” input of common portable (Bluetooth) speakers. To drive a speaker directly, we need an amplifier. And we can use a trusty transistor for that:

This design attempts to use as many of the same value of parts as possible. There is some leeway too. If you don’t have a 100k pot, a 50k or even 10k would work, it just reduces the adjustable frequency range. If you don’t have 1uF capacitors, 2.2uF or even 10uF should work.

The particular op amp isn’t critical. I’ve specified a dual op amp here so we can add a filter later. You could also use a single op amp chip like a 741, TL081, TL071, etc.

For hearing the output, this op amp can drive a small speaker, but you an also hook up a 3.5mm (1/8″) jack and run it to a small portable speaker or even headphones (be careful with volume though)

Here’s one way to wire it up, hewing as closely to the Fritzing diagram as possible. And a video demonstrating what it sounds like.