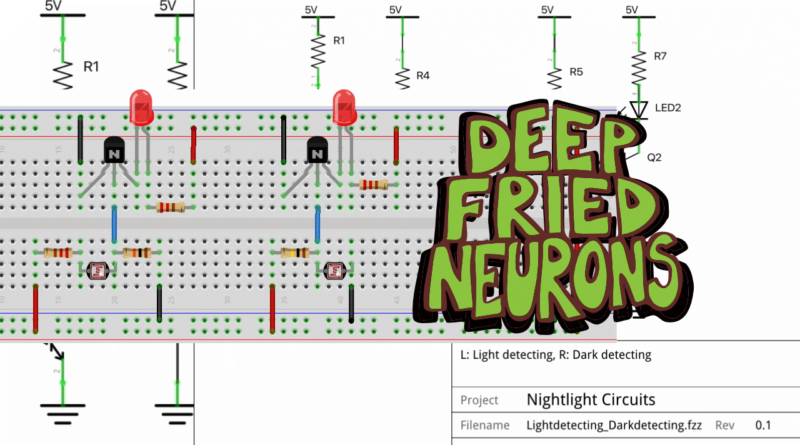 We start round two of our DFN Happy Hour reboot focused around making circuits! We made RC Circuits and RC Circuit Projects first, and now we’re moving on to bipolar junction transistors, photon detection, sensors and biasing. Whew. All that in a 5 component circuit? Goodness.

Read more below to get the BOM and watch some videos to lay some ground work about transistors!

For more information on this circuit and transistors in general, check out this playlist, but for the basic gist of what we’ll be talking about see the figure below.

In the circuit on the right, the LDR moves to the ground side of the voltage divider, no longer needing a current limiting resistor. When the light shines, again the resistance in the LDR drops, but now that drops the voltage at the base of the transistor to below that of its emitter, turning the LED off in the presence of light.

We’ll talk more about why a voltage divider gets used here, why the LDR can’t just be in series with the base, during the stream. (Hint, it has to do with the forward biasing of that PN junction…)

Labels based on Figure 1, which is a circuit with a 5V USB charger supply.

As mentioned, LDRs kinda suck because of their cadmium usage. They also can be slow to respond. Photodiodes and phototransistors offer some alternatives. Links that go into detail about the different light-detecting parts and circuits:

The circuit on the left swaps a phototransistor in for the LDR. It will behave a little differently since phototransistors have a faster response time. The resistor values will need to be changed up depending on the part.

The circuit on the right uses a photodiode. This circuit has more of a if (!isLight) { led = on }  than if (isDark) { led = on } action than the others. Since photodiodes pass much less current than LDRs and many phototransistors, a circuit using one will likely need extra signal amplification. A pair of transistors can do this. In the configuration shown, using two NPN transistors, that first transistor in the pair connects the base of the second to ground, essentially creating a “not gate.” This inverter means the photodiode moves back up to the voltage positive side of the voltage divider. Using a PNP as the second transistor would prevent the inversion (à la Sziklai Pair (seek-laa-ee)).

* These branches of the circuit can, and to save power should, be pretty high impedance. The resistor values can be as high as you can get away with. Notice in the circuit simulations they have very high values (1M, 30k, etc.).