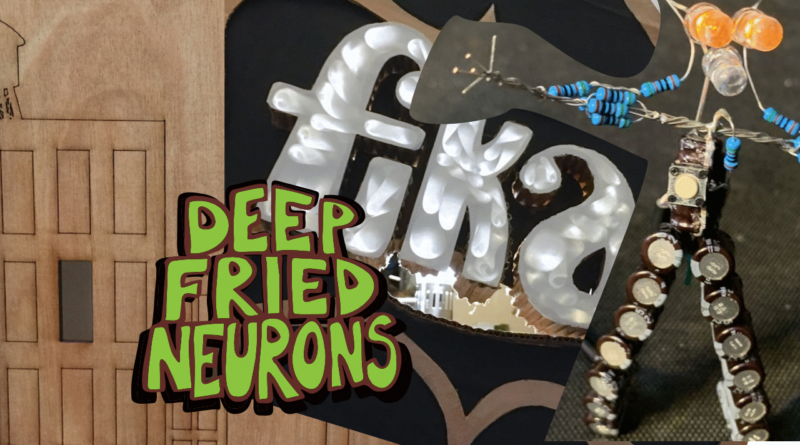 Last Friday (April 23, 2021) we introduced our first circuit, a simple RC Circuit allowing an LED to fade out without any fancy PWM involved. This week, Carlyn, Barb and Tod will show off the projects they made using this simple circuit. It’s round one of the no micro-controller circuit project challenge!

For my project this week, I decided to revive an old project and finally get some paint on it. So here’s the old fika sign from when I was doing the month of typography, made from cardboard, paper, and reflective mylar tubes. As of the time of this posting, the actual circuit to light this up is still in prototype mode, which you can see in the gifs below. The LEDs I’ve chosen are rgb cycling ones that pop up with different colors every time you light them up. Check out the final version on Friday.

Semantically when I think of things that go out at different times, I thought of lights in a cityscape. So I laser cut a simple image with holes cut out for three of the windows. Behind each window cut out is a index-card light box. I had to add some diodes to the circuit in order to keep the LED/capacitor/resistor units on distinct circuits. Without the diodes, all the capacitors would back feed to the shared power bus and all the lights would go out at the same time.

This circuit conceptually is just two LED + resistor circuits with a big capacitor hanging across it.  The equivalent resistance of each circuit is about 1.1k ohms.  As a design limitation, I said I had to use as many of these surplus 15uF capacitors and 500 ohm resistors as I could.  So I ended up using 16 of them and a bigger 300 uF as his “backpack”. Each of his arms are made of 4 resistors in parallel (125 ohms) and two in series (1k ohms).  A button on his chest completes the circuit, lights his LED eyes and charge up his body.  When you release, the capacitance hug you’ve given him slowly discharges, keeping him glowing for a few seconds.

One thought on “DFN Happy Hour No. 40: RC Circuit Projects”