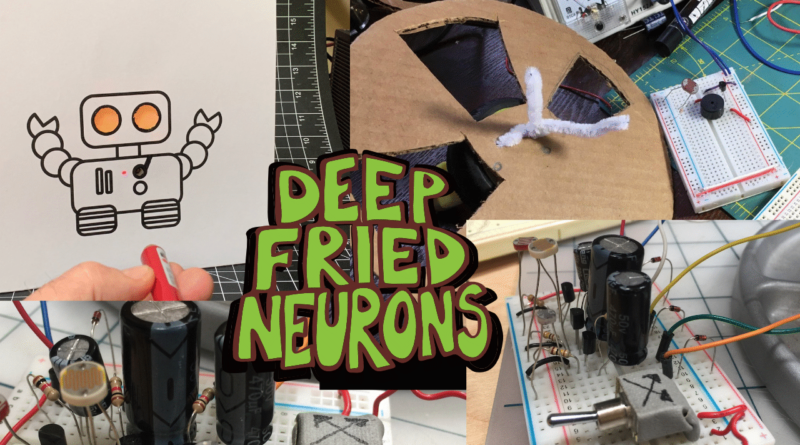 This we we show off our second round projects that use our dark detecting circuits from last week. We’ll hear a new sound machine, infinitely resurrect robots and figure out… exactly how many parts can fit on a 400 point bread board?

The first thing I did with this circuit once I’d built it was try to stick a buzzer in there, and was delighted once we got it to work and I was able to irritate people with incessant beeps. And if you’ve seen my first hexachord, or the motorized noisemaker that inspired it (which at least Carlyn has), you’ll know how inclined I am to make rhythms with new toys. So I made a disk out of cardboard, cut some holes in it and strapped it onto a noisyAF geared motor made for an RC car, and stuck it in the path of the light. Voila! Light and rhythm!

Clearly I have something for robots.  In this week’s design, an LDR and NPN transistor is turned into a game of Shoot The Robot!  The evil robot* is staring you down with its cold orange eyes. You take your trusty laser and shoot! Aim for his central motivator. If your aim is steady and true, you will deactivate him! But only for a while, he comes back to life! Attack again! (*Note: robot is actually cute and not evil. You are shooting him in his heart, which makes him sad. But only for a while. Then he loves you again! And his eyes again glow adoringly at you)

The transistor switch circuit has a pull-up resistor that keeps the transistor turned on and  LEDs lit. But when the LDR is illuminated, its resistance drops enough to pull-down the transistor base voltage, turning it off and extinguishing the LEDs. The 100uF capacitor keeps the base level low until it charges up, keeping the LEDs off for a second or two. The construction is paper on cardstock, using Carlyn’s cool lightbox technique to make the eyes glow. The LDR has a light shield tube around so you must aim precisely down it to activate.

I’m sticking with the same structure, laser cut panel backed with LEDs, but expanding the circuit to add more texture to the interaction. I built two versions, one with a single LDR controlling all three LEDs and one with an LDR dark detector a piece. I used three different LDRs to get some differences in behavior without having to have room on the board for trimmer pots. The breadboard illustrations are not exactly how I wired things up, but doing a mock layout primed my thinking so when I sat down with the real board it went very smoothly.

One thought on “DFN Happy Hour No. 42: Light in the Dark Projects”