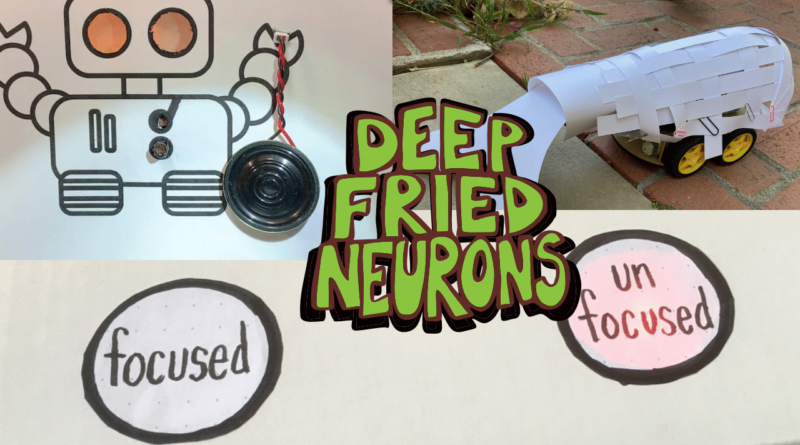 Blinking, beeping and rolling, we’ve got astable multivibrators running all sorts of projects this week!

We have had this robot kit lying around in the lab for awhile and instead of using all the fancy electonics it came withwith I decided to drive the motors with just my astable multivibrator and some minimal support circuitry (essentially a 10k resistor, TIP120, cap and I probably should have put in a flyback diode but it isn’t in the circuit pictured). The back and forth motion had an aquatic vibe so I gave it a woven fish carapace… now if only I can figure out how to reach in and turn it on again…

The tiny robot from last time has captured a speaker-creature! Unfortunately it makes quite a racket.  And when you shine light on the robot, it cause it to squeal all the more.  So much so that it causes the robot to wince from the noise! You can see his eye next to the speaker get dimmer as the speaker-creature squeaks higher.

The circuit is the same astable multivibrator from last week, but with the main timing capacitors lowered to 1uF.  This puts the oscillation range in the 100Hz area.  Two LDR/photocells are placed in parallel with the main timing 10k resistors to drop the period (and increase the frequency even more). This gives you frequency control by shining light. You need two LDRs because in this circuit, there are two timing elements and they should be changed as equally as possible.  (This is one of the reasons why astable multivibrators are not used as oscillators generally)  To output to a speaker, a 10uF capacitor is used as an AC-coupler to the speaker.  But this isn’t good enough as you can tell one side of the multivibrator circuit is impacted by the extra load of the speaker. You can see this in how the right LED dims.

The circuit simulation is here: https://tinyurl.com/yfwohqse  And here’s a small demo video of it in action:

Rainbow LEDs. I know I’m going to use them, you know I’m going to use them, let’s not fool ourselves. But the fun thing that happened when I plugged these things into my astable multivibrator circuit is that the varying thirstiness of the red, green, and blue LEDs in there means that it goes through the capacitors’ cup of juice at different speeds. What a perfect opportunity to make an artwork in honor of executive dysfunction! The box is from a cardboard cell phone VR headset, and the LEDs are hot glued into pieces of a boba straw to get them where I wanted them.

One thought on “DFN Happy Hour No. 44: Astable Projects”