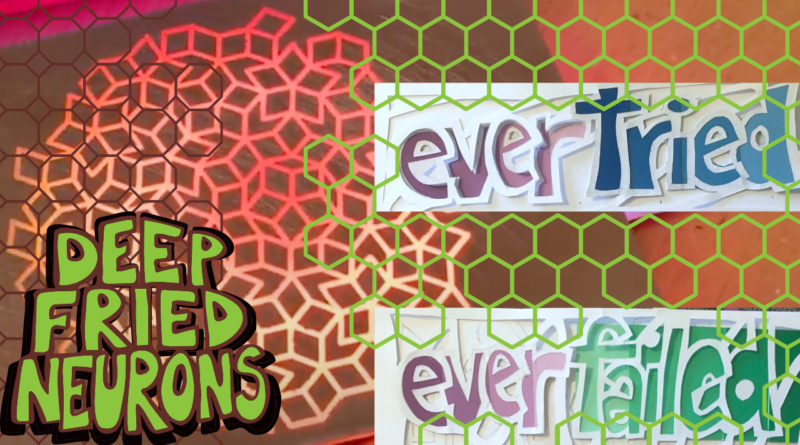 Coming up Friday at 5:30 pm PDT members Barb Noren (BarbMakesThings), Tod Kurt (todbot) and Carlyn Maw (carlynorama) are back streaming again! Last week we made hugs that could be shared remotely (post | video) and this week we’re sketching out some coloring book pages.

I mostly have never enjoyed coloring books. I do remember liking one though, a book of tessellation patterns. Extending the work on the graph paper from week one, I tried to generate some more patterns. They’re all cluttering up the github repo. I made a ton. Too many. But what I discovered was that I like the simpler ones the best. The less elaborate the pattern, the more options to find your own way when you color. Printing out and color an existing pattern also helped clarify the thought process around how to generate patterns, too.

I never did coloring books much when I was little, but with the explosion of adult coloring books, the geometric patterns ones really caught my eye, specifically the tilings/tessellations or generative patterns ones. You can end up with surprising depth from simple rules. Two of these particular caught my eye: Penrose tilings, because it’s a rare case of aperiodic tilings, and overlapping circles grid, because from there you can get hexagonal tilings or just about any other geometry. Instead of paper, I’ve wanted to explore more how PCBs can work as light diffusers. Since I have a small PCB mill, I’ve started on a “book” of various patterns to try to act as LED diffusers. The results are pretty interesting!The FR-1 material I’m using blocks almost all blue light, making all diffused light look very orange. Next steps are to create a few more patterns, try white LEDs, and device a “spine” to hold these PCB “pages”, and to try these ideas with PCB fab houses. Here’s a small video of the results so far.

Many years ago, back when I did papercuts just all the time, I made something I called notebook etudes (https://www.flickr.com/photos/ohhmyhead/albums/72157632501657272), where I cut patterns into sequential pages of a notebook, allowing for layers that combined the patterns together. The way that I made them was just drawing lines and cutting the negative space. So when we said coloring pages, I thought, “hey I bet I could color with paper in the openings of some of those lines, and play around with the layers.”

Well, of course I’m still working on it, but I’m pairing up doodles and sketches with lettering and quotes. This one will be the bastardization of that quote by Samuel Beckett, “ever tried, ever failed, no matter. try again, fail again, fail better.” The repetitive nature of the phrases lend well to the same cut words being used on multiple pages. It’s just kinda fun to play with a 2d medium in a more 3d way. Gives me 3d chess vibes.