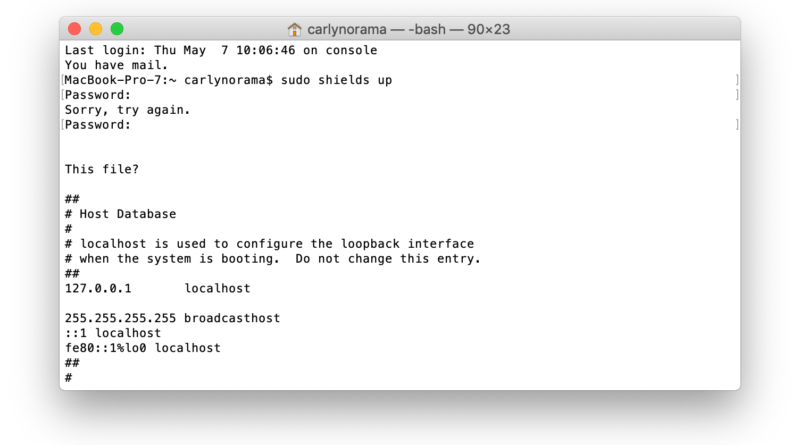 Last week I wrote a command line script to print out what day of the week it is. This week I wanted to have a command that I could type that would block me from going to websites that get my mind racing and unable to work as part of the DFN “mental PPE” exercise.

One option would have been to set up a RaspberryPi Pi-hole project which works essentially as a DNS server on that can serve your whole network. I didn’t bother with that because I already have a process that mostly works for me involving updating my hosts file to redirect my computer to call up localhost instead of the problematic website.

I prefer to update my computer’s host rather than change the router softer or set up Pi-hole because it has the advantage of only applying to that one device, and it will always work no matter what network my computer joins. I’ve been doing it by hand (sudo nano /etc/host), but since domains frequently need multiple entries (www.website.com, website.com, mobile.website.com) this can make me reluctant to bother. So instead of spending the 5 minutes… I spend an hour+ in a web rabbit hole. Doh.

The shields script takes the inputs up, down and offline to swap in preprepared text files to the /etc/hosts file. Since the script lives in the utilities folder that I mentioned last week, I can run it from any terminal window. Unlike last week, I chose to write the scripts in pure bash instead of python. All of the scripts mentioned can be found in a repo called myutils on GitHub.

The assemble_hosts_files collates the all.txt, base.txt and clear.txt a collection of files with different url’s in them. In the future this will allow me to make more named sets based on various combinations of files.

At the end of this script the created file is set to be owned by root and and only root can write to it. (chown | chmod) This gives me some layer of protection since these files will be swapped in to the hosts file. The folder that contains both the prepared files and the source files also belongs to root.

To make changing the permissions easier, there is also a set_permissions script.

The terminal will ask for a password when the script tries to do something over the user’s normal pay grade.

This handy script makes it faster for me to block out websites that distract me when I am working. I do not recommend setting up a chron job to swap in hosts files based on the time of day. While that would be super handy, a malicious change to the hosts file would be kinda a big deal. For a chron job to be safe for this specific script, not only would the script have to be secured, but all the support files (and directories) as well. It’s possible, but it requires care.

To set this up for yourself: