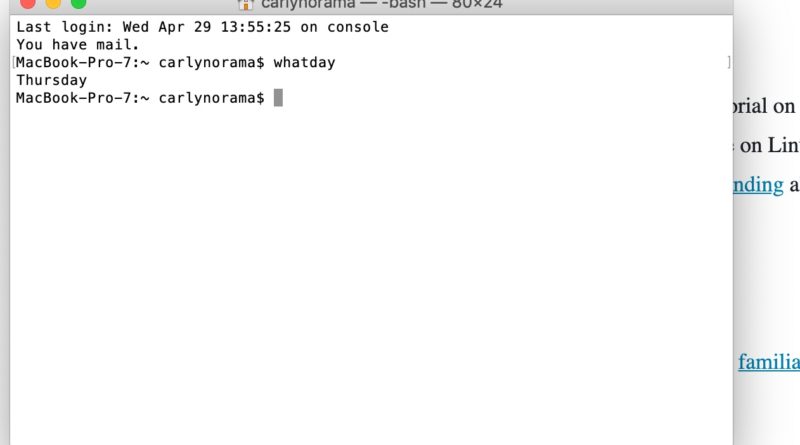 So you don’t know what day it is? Here is a quick tutorial on how to set up a small program to print the current day on the command line on Linux and MacOS computers. It assumes some basic command-line interface understanding already.

Write and test the script

I’ve chosen to use python for this because I’m already familiar with its calendar functions. Four main sections make the script work.

Copy and paste this code into a file and save it as whatday.py. Once the file is saved, navigate to the directory that contains it using your terminal. At the prompt write python3 whatday.py and the full name of the day of the week should print out. python whatday.py may also work as this code can still be run by older versions of python as well.

Let it run on its own

Let’s make it so you don’t have to type python3 every time. The file will still have to be called from within its directory or with the full path, but you won’t need to prepend the environment call. First of all, create a directory for utility files if you don’t have a spot already. It’s better to keep them all together in a directory that just your user can access for now. For example, ~/Developer/myutils/bin. As a reminder, “~/” refers to the user’s home directory.

Typing whatday alone at the command prompt should now print out the name of the day of the week. If there is a problem with the initial compiler declaration (the “hash-bang” line at the top), this is when it will show up with an error like “usr/bin/env python3 does not exist.” Try entering which python and/or which python3 and use that path although it is not preferred.

Run it from anywhere

I don’t want to have to write out ~/Developer/myutils/bin/whatday.py every time I want to know what day it is. I want to be able to write just whatday no matter what directory I’m working in or when I’ve popped open a new terminal window. If you’ve been dinking around with shell scripting already at any point since your last fesh install, there may already be a file named ~/.bash_profile, ~/.bash_rc or ~/.profile already floating around. Go looking for it.

If it isn’t there, make a new file called .profile. Of the files mentioned above, it is the lowest priority. This specialty bash file should run when you open a new terminal window, so you can use it to automatically add your utilities directory to the path your computer uses to look for command names. The example assumes using the text editor nano, which is fairly beginner friendly.

Add the following line to the file then save it.

Open a new terminal window and type whatday. The name of the day of the week should print. If not try adding the PATH line to ~/.bash_profile or ~/.bash_rc instead. Adding an echo to any of these files will confirm if it’s running and when, e.g.:

Date and Time in Python

2 thoughts on “What Day is It? Command-line Utility”