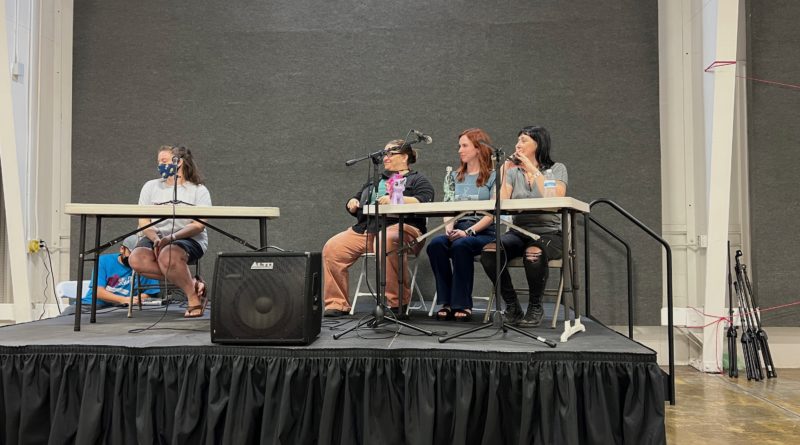 CRASH Space was at OC Maker Faire this past Saturday and it was a blast! A few CRASHers volunteered to run our booth where we had some member projects on display, including the CRASH dome, Sparkles the Soldercorn (v1 and v2), Princess Hothead, assembled model kits, LED displays, 3D printer (printing CRASH coins all day to hand out), cosplay staff, cardboard creations, and J-shaped infinity mirror. Throughout the day we chatted with visitors about CRASH Space and our various projects, as well as explored the faire and the other booths, panels, and activities (including some light woodworking).

Thank you Barb, Emma, Aquiel, Steve, Sam, Jay, and Michael for bringing projects, setting up, hanging out, and cleaning up afterwards!

Also, one of our members Kevin had his own booth next to us for his superPiano project which is very cool and worth checking out.

We also ran into friend of the space and LED-aficionado Debra, who tweeted some nice photos of us and our booth:

Jay took some great photos around the maker faire that are on his Instagram: https://www.instagram.com/kf4kco/

Later in the day, Barb and I participated in a panel about makerspaces where we talked about CRASH Space and makerspaces/hackerspaces in general, along with representatives from two other makerspaces.

Overall it was a pretty successful maker faire and I’m looking forward to the next one!