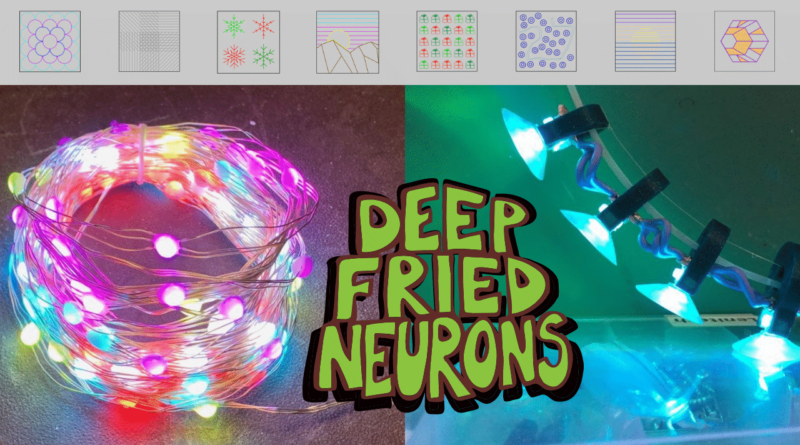 Coming up Friday at 5:30 pm PST members Barb Noren (BarbMakesThings), Tod Kurt (todbot) and Carlyn Maw (carlynorama) ring in the New Year! Tod and Carlyn get super close to wrapping up the tree and Barb reorganizes Nixie. December we got things mostly done… which as we kick 2020 out the door feels good enough!

The whole episode was thanks for existing!! You gotta watch it!

I’ve not done much on our plotter Xmas tree this week because, well… if you follow me on Twitter, it’s likely you’ve seen me ramble on about these crazy new Christmas Tree lights we got for our tree (first tree ever!). They appeared to maybe be WS2812 / Neopixel compatible and yup, they were! I wasn’t able to find appropriate “Christmas Tree” light forms of the WS2812 lights, but Carlyn did! And they were even better than normal Xmas light styles. These were “fairy lights” with small beads of light connected by solid enamel-coated wire that almost disappear visually. But the weird thing was, as I learned was discovered back in November, these LEDs remember their address when cut out of the strand. If you’re familiar with WS2812-style LEDs, this is bonkers. Normally these LEDs have four pins: +5V, Gnd, DataIn, and DataOut. To make an LED strip, the LEDs are wired in a chain, one LED’s DataOut going to next LED’s DataIn. This is great! It means you just have one wire to control hundreds of LEDs!

What’s going on with these LEDs? You cut them up, wire them in parallel (there’s no data “in” and “out”, just “data”) and they still know where they should be in the data stream, only picking the data for them. I’m still researching this with the help of some friends who can navigate Shenzhen better than me, but it’s looking like these LEDs have their address set OTP (one-time programmable) at the factory. No LED part number yet. If you’d like to get some to try yourself, here’s the 100-LED exact Amazon ASIN I bought as well as the 200-LED ASIN Carlyn originally found (both affil links).

After slacking off last week, we had some catching up to do. I wanted to focus on line drawings. Most of them are designed (see below). All but a couple are on the tree. We started having an alignment error which left a few of them wobbly. Frustratingly, I would have two good test runs and then it ended up off kilter on the tree! My reaction, given the deadline, was to work around it by re jiggering a couple of them to have more of a tolerance.

So I haven’t quite finished Nixie yet, but I have made progress on her this month. Part of that progress was realizing just how much work still needed/needs to be put into this project. Because I don’t know how to ambition reasonably.

I did manage to get both types of arms (cable controlled and corset boning) moving, using the pi zero with servo bonnet. When I realized that for some reason past!Barb thought that the top servo needed to be a continuous rotation one but that it really doesn’t, it simplified matters greatly. I’ve also begun the process of securing all forty-eight (48) discs to the arms using super tiny pin vise drill bits, pieces of 3d printing filament and hot glue, which is tedious but effective. I’ve also started soldering the forty-eight (48) 2812 LEDs that go behind each suction cup on each arm disc. And I’ve confirmed that these 3d printed models for the arm discs should work fine for all that they need to.

It occurs to me now that I haven’t actually written out how many discs and fiddly-placed LEDs I’m using on this before. Might be why I didn’t realize how long it would all take.

Next bot will be one servo.  One LED. Simple body.