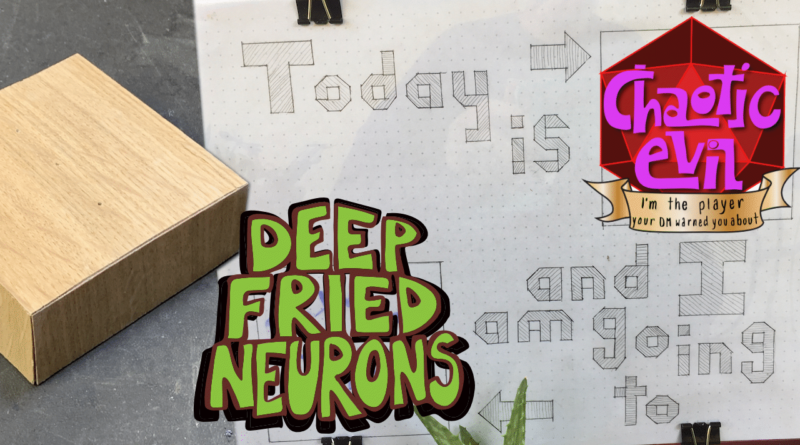 Last week we were kinda wiped out. Go figure. So no post got posted. We did broadcast and ramble on about what we might do in November, now that we might be able to slowly start thinking again. This post is going to have the review from weeks 24 and 25 combined as well as this week’s preview.

So join us Friday (tonight) at 5:30 pm PDT as members Barb Noren (BarbMakesThings), Tod Kurt (todbot) and Carlyn Maw (carlynorama) stream again now that we might be getting our November act together.

“Thanks for Existing!” Awards Episode 24

“Thanks for Existing!” Awards Episode 25

I’m working on a small box that plays radio static. It is otherwise featureless save for a single infinite-rotation “tuning” dial.  As you tune it, you can occasionally pick up the sounds of distant screaming. I’m calling the box “2020”.

I decided to try this in CircuitPython. And it seems quite possible as long as your using an “M4”-based micrcontroller board that has the “AudioCore” library.  The code then becomes just two looping WAV files, one for static, one for screaming, that are mixed both algorithmically and based on the tuning knob rotary encoder.  I think the final version will have multitude of WAVs that are mixed at various levels.  Currently the box is just some veneer over a blink(1) cardstock box, but I’m thinking of making a nice Deco-inspired wood box for it.

I’ve decided for my November project to get my POD (print on demand) shop set up already, dammit. I’ve been halfway to that for ages. And as I’ve remembered, I actually uploaded a number of my designs to my old society6 shop like 6 years ago, and then proceeded to not market any of that at all. This was unfortunately before BarbMakesThings was a thing, so I might need to make a new account for “branding purposes.”

My intention is to start with adding more things to that shop and possibly getting a second site set up somewhere else (like the more visited redbubble). I’ve been doing so much doodling and lettering that should lend well to stickers, shirts, mugs, and prints, but I think the first ones I’m going to get up there (especially since I’ve had people actually asking for them) are my D&D alignment designs. They’re nearly ready; here’s a preview.

Maybe just because the glorious Mandy Patinkin has been on my mind from his and Kathryn Grody’s election videos, but “You told me to go back to the beginning, so I have” from the Princess Bride keeps echoing in my head. I am starting back at the top, reviewing some of our more projects, seeing what’s working for me and what can be improved. Coming off the election sprint with the COVID cases on the rise again, re-centering, realigning, recommitting seems like the right thing for me to be doing.

The first thing we did was a day of the week sign. I had stopped using it because using a post-it-note a day felt wasteful. This new set up lets me use dry-erase markers on transparency film. Alternatively I could have used a clip frame, but this light-weight magnet-docking version works really well and I had all the materials on hand. So I won’t loose the the marker, I used a dead one to create an attachment point. For handy reference, a video on stopper knots. I used the Celtic Button Knot, which is related to the Monkey’s Fist.