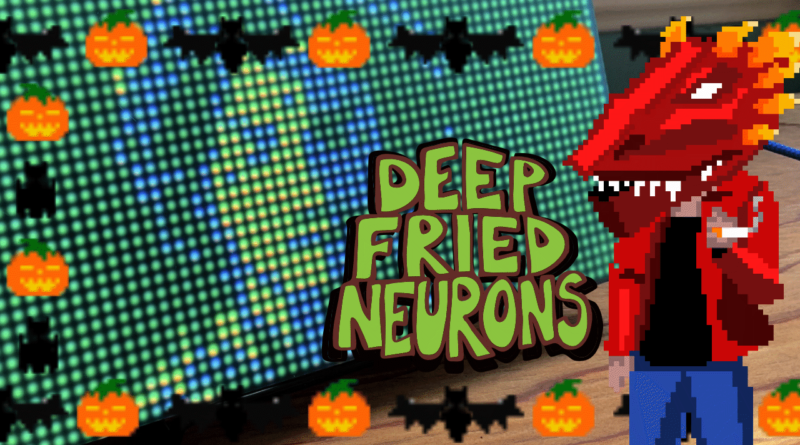 Last week there was no Deep Fried Neurons since we were mourning the loss of our friend and CRASH Space president, Justin Corwin. Justin was scheduled to come on Deep Fired Neurons in November to show off the results of his month long October project, a video game. He was working on the art assets, practicing his pixel art skills, when he died.

This week we’ve decided to make pixel art in his memory while we continue to process the loss, tonight, Friday at 5:30 pm PDT.

Various Pixel Art Resources, some from this article by John Park on the on Adafruit.

I tried my hand at pixel art and discovered I cannot do it. But I wanted to honor Justin in a pixel arty way, so I instead tried my hand at converting some of his pixel art for display on a 32×64 RGB LED matrix driven by a Matrix Portal driving. This wasn’t so easy. First, scaling down the already abstracted ~250×250 pixel images to something around 32×64 doesn’t look right if you use normal resize techniques: the results are too fuzzy. Thankfully ImageMagick has an “–adaptive-resize” option that preserves the sharp color transitions of pixel art. Secondly, most of his art was relatively 1:1 square in proportion but the LED matrix is a 2:1. This means some editorial cropping of the images to keep the most salient parts visible. Not an easy task when every pixel counts. I hope I did them justice.

For this memorial journey into pixel art, I’ve decided to go with what has been in my head all month and make my dragon, but animated. At time of posting, I only have the base dragonhead, but that’s the biggest part of what’s needed. John Park apparently uses Piskel, so I gave that a shot to make this. It took a little messing with to figure out how best to use it, but I eventually imported a photo of my dragon head and used that as a reference. Eventually, I hope to have animation and smoke and a leather jacket.

I’m kind of enjoying this medium. It may continue after this week.

I started with one idea, but I hated everything so I simplified and just started making Halloween themed 16×16 sprites. Once I made a candy bowl… it needed a door, which need a house, which needed a yard… The scene fills a 256 horizontal pixels by 240 vertical pixels area, like the original Nintendo Entertainment System. Here’s a not so spooky house to go trick-or-treating at.