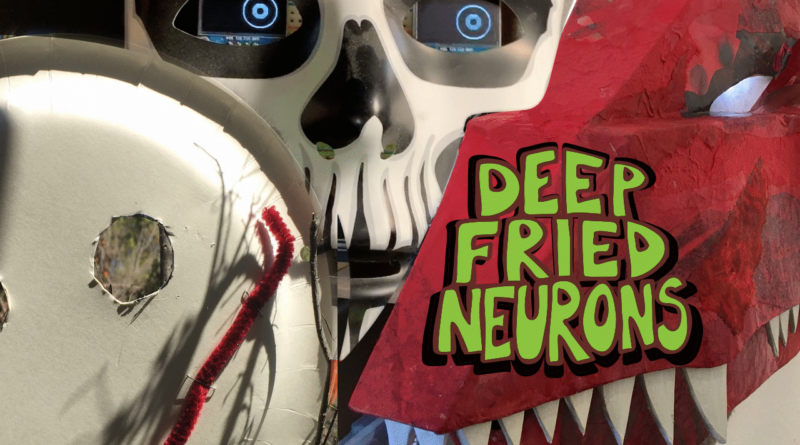 It might not look tremendously different from last week’s picture, but a lot of work went into this. I finished the base coat on the other side, and the back, and the bottom, and all of the horns, then added a layer over most of the decoupaged magazine cutouts of red tissue paper, which ties it all together in a way I really like. I’ve added the top row of teeth, which are actually the only painted thing on this whole dragon head. The lower teeth will come later.

The cherry on top of this week’s progress is adding vellum behind the eyes and adding LEDs inside so that they can light up! Unfortunately, the careful balance that it had already is thrown off by putting the bedlam of hacky of hacked solderless breadboard nonsense so far forward, so I’m going to need to simplify it a bit and replace that. For now though, I’m calling the dragon head “done.” I’ll make the little updates as I have time, but I’m going to focus on another part of the costume for next week. Either jacket or 3d printed necklace, we’ll see.

Here’s two more “Spoooky CircuitPython Circuits” using the QT Py board and purposefully small programs, part of my QT Py Tricks series. Go there for the source code. The first circuit is a pair of OLED displays arranged like eyes. Behind a mask it looks really good!

The second circuit is the old trick of using capacitive touch sensors in an analog proximity mode. The result can be pretty twitchy and highly dependent on environment and power supply, but it looks good on camera! 🙂 And in a more defined use (like on a PCB) can give repeatable results, like the “analog” A input on my TrinketTrigger Eurorack module.