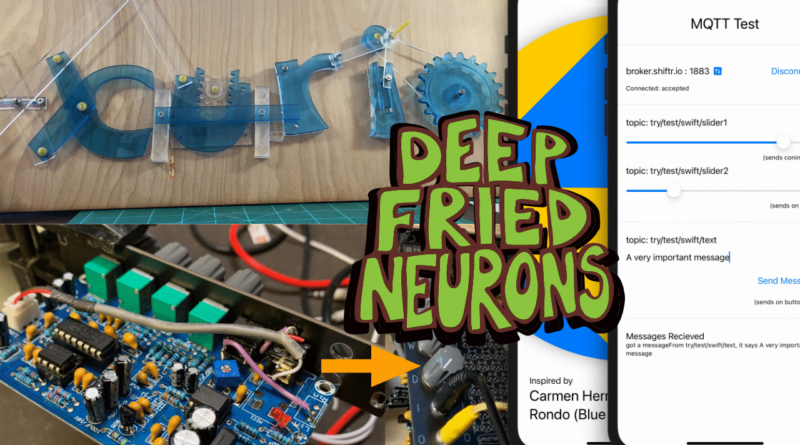 Coming up Friday at 5:30 pm PDT members Barb Noren (BarbMakesThings), Tod Kurt (todbot) and Carlyn Maw (carlynorama) stream again! Last time we did more on our September Projects, Barb & Tod made their virtual designs real while Carlyn made real things virtual (post | video). This week we see if anything happened during our week off??

We took a week off last week while Carlyn & Tod had a virtual conference to attend. Can’t have too many interactions with people in a week! That would be so un-2020. This is the redux for the DFN that happened waaaaaayyyy back on September 19th…

Things Getting Us Through…

This week this will be morphing into the “So glad this/they exist” Award, but in the mean time great things getting us through…

Tod: “My thing is and an old thing. It’s a British TV show from the late 80s called “The Secret Life of Machines” Here’s a youtube playlist of a pretty good rip.” Also… the Neon Retro Arcade will let you rent a video game.

Carlyn: How to Citizen podcast, especially the first episode with Valerie Kaur. The labour for justice is an act of joy. Resistance needs to become reimagining. Citizen: a set of responsibilities, a calling on how to show up in the world with bravery integrity and dignity. Grieving is frontline social justice work.

I’ve not been working on my Touring Machine Eurorack modular synth module, but I have been hacking a bit in that space. Back in 2019 John Park and I saw the Waveform Magazine DIY PT2399 delay module article. I got the parts and half-assembled mine, but the build guide was pretty vague in some areas so I just left it. This week I picked it up again and got it working!

The PT2399 chip is a weird little beast but is very cheap for a delay unit. The ebay listing for a fully-built PCB with preamps and jacks is <$9 (and forms the basis for the Waveform module). Some quick hacks on it and it turns into a usable Eurorack delay module that’s also noisy and distorty, which can be fun. Here’s a little demo video of it in action.

So taking a week off during a 30 in 30 sprint does not actually work that well. But there are a few new things and I put the whole schmeer up into one big 2020 September 30ish Swift Project Repo. 23 Projects in total with 3 more scratch pads for good measure.

The Swift I wrote this week was inspired by the Feelings Potato I built to work as part of a sonic data interface piece with some folks at the conference. That was fun.

This is my “finished” physical mechanical curio. Every time you take something from virtual to the real world, you encounter issues that you weren’t expecting. I initially planned to connect the U and the R, but that wound up being problematic, so I’ve kept them separate. Fortunately, the C will drive the U quite happily. I’m excited at how well most of it worked though, including the slider crank mechanism on the I and the pulley belt driving the gear O.

I lasered most of the holes in a piece of plywood and used a mix of screws/nuts and 3d printer filament rivets (https://www.youtube.com/watch?v=ReyMdd8uFIU) to put these in place. It moves, mostly. It needs a little bit of tweaking, but overall, it is a mechanical curio using one of the fonts I created last month, which is kinda a cool thing to have. Once it’s smoother moving, it’s definitely going to need some framing decoration, which I’m looking forward to.

My thing-that-makes-the-world-less-crappy is this video by Kurzgesagt: The Egg – A Short Story, which is one of the few youtube videos that made me actually stop and think for a while after watching it. https://www.youtube.com/watch?v=h6fcK_fRYaI