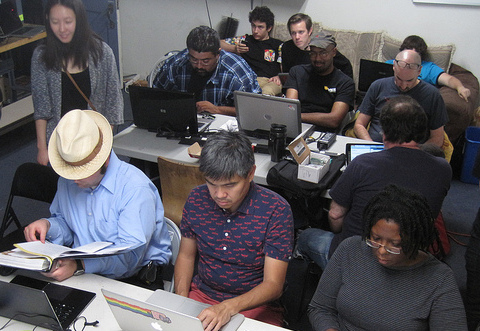 In those two years, I found that the hardest problems in tech had nothing to do with tech at all. The hardest problems I saw us facing each day revolved around the complex navigation of an industry with a deeply ingrained bias about what kind of people belong there, what roles they should be allowed access to, and what level of respect they deserve.

In direct response to this, Learn to Code with Us was born. On the surface, it was a free educational program that offered practical technical mentorship to adults entering the tech industry. But beyond that, it had a promise that was direct and to the point: We will offer our assistance, and we will do it while treating each other with respect. No micro aggressions, no keyboard grabbing, no condescension, no sexual advances, no well actuallys, no bullshit.

Historically, Learn to Code with Us was the first group we had that promised to enforce these rules.  And we enforced them often.  As a result, the CRASH Space code of conduct was born out of this group.

For four years we provided a space where new learners could come meet one another and ask questions in a friendly, helpful environment. We worked hard to ensure that attendees could spend their energy productively on their work, and would not have to waste it on overcoming pointless and arbitrary obstacles.  When the program started, we instantly filled CRASH Space beyond our capacity, and I’m thrilled to say that over the years Learn to Code with Us has continued to reach thousands of people annually.  And on top of that, we have helped countless more via one-on-one tutoring sessions and around-the-clock assistance, including:

It’s been a great four years, which makes it hard to say that 2016 will be Learn to Code with Us’ last year.  Our commitment to creating a welcoming community and educational space remains the same, but with the new year comes a new direction.  Let’s enjoy the memories we’ve had, because in 2017, we’re on to something new.