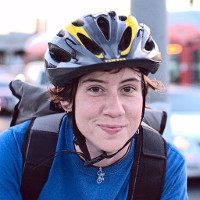 WHEN: Wed, Jan 11th, 8PM
WHERE: CRASH Space
WHO: Open to the Public!
How Much: FREE! (Donations to CRASH Space always welcome!)
RSVP: Here (Space is limited!)

Our system is broken. No election, no technology is coming to save us. We’ll briefly explore both traditional and emerging paths to creating change in government, then investigate what these things mean to us. We’ll breakdown the us vs. them argument and look at government for what it is, a collection of individuals often working towards the same end. What is our role? Are we civic technologists? How do we move forward in this new civic way? What’s data got to do with it?

Vyki is a software programmer, cartographer, and cyclist who fell in love with Los Angeles after landing in downtown in 2012. In 2014, Vyki cofounded Compiler LA, a civic tech consultancy dedicated to building a better Los Angeles. Through Compiler her work has included serving as an ambassador for the state’s open data program, as well as developing data dashboards, data governance, and data standards, for clients such as City of Los Angeles, California Health and Human Services, California Community Foundation, Future of Cities, Goldhirsh Foundation and LA2050, City of Santa Monica, CicLAvia, and the California Health Care Foundation. She currently serves as a member of Code for America’s National Advisory Council, and is an advisor to govtech startup CityGrows.

This event is a part of the CRASH Space Civic Engagement Survival Guide: a series of free talks and workshops focused on creating a community that is informed, organized, and engaged.