Michelle posted on FB today that we all should write more, it gives us more clarity of thought. Here is a blog about what has been going on at the space so I can type things and feel good about myself.
My projects are moving ahead slowly. Problem with trying to do 5 major things is that you can only grind on one or two at a time. Right now I am focusing on four primaries:
1. Trunnion table for mill
This is coming together. I had a bad moment at the machine shop yesterday, my riser blocks had some taper in em so I will have to flat mill them shorter than I wanted. Here is a photo of the table and some other stuff I have been making here:


Thanks B for the photo support
2. Thrust mount for home depot engine
Why has this taken me forever?

The only thing keeping me from firing off a real rocket is making these damn thrust mounts. I keep not finishing though. I think I need to finish by a set date in order to progress beyond this case of engineers block. Mark and Molly helped me redesign the part at Spaceup, all I have to do is cad,cam,machine and weld.

3. Keyence GT2 backhack
Tom Diglan helped me parse the output of a very fancy sensor. I am trying to avoid spending tons of money on decoder modules. Next step on this project is to try to emulate the decoder using some kinda microcontroller.

4. PintleSpike design
The pintlespike is an engine design I came up with over pho in dark December. I was all alone and very emo, but I came up with a way to.. maybe, overcome the structural and cooling problems inherit in an aerospike design. They are still not worth building but I am having fun.
Fun fact: used Houdini (Touch Designer’s disappointed father) to do engineering mathematics. Yay for using hollywood magic to solve rocket problems.

and a few secondaries

1. Big ass laser cutter retrofit
soo I got some CNC controls in the mail a few days ago, and got to playing with em. 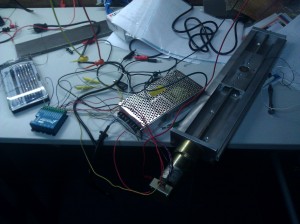 The photo shows a linear slide with a pittmann servo on it (Tom’s lending it to the space for test purposes), a power supply, and a geckodrive. the gecko is wired into the motor, the motor encoder, the lab signal gen, and a few other things.

I have been playing with these geckodrive 320x units for servo drives.. and I am not super happy. Tuning them correctly is rendered impossible by the lack of documentation as to where the test point is for the scope probe blah blah.

quick CNC lesson: Servos are normal DC motors with a magic bit called an Encoder on them. The encoder is a little bit of optoelectronics that reports the rotation of the spindle, in this case, 500 times per rev. This servo drive therefor could be accurate to 1/250th of a rev, as it bounces between two clicks to keep position. PID loops ftw.

What does this have to do with the laser? I want to get a 1 axis servo CNC machine running with this setup, then transfer it to the laser cutter, which uses almost identical servos. that way our x-y table is alive again.

3. ED-209 CNC lathe scratch build
ED-209 is sitting on shelf waiting for me to pony up the cash for a spindle.
I am gonna go stepper control on it and have live tooling

Some other news:
Mirada (Del Toro’s studo) has donated a metric fuckton of render nodes to the space. currently at a buddies house. I will snag as many as we can fit in the rack. Also an xserv and xserv raid.

Steve has built what can only be called awesome: a beanie baby cannon. we shot all the way from the front room to the back of the shed with it. The baby somehow survived.

Kevin had a class on MAX MSP which sounded like some kind of dubstep ghost tour. Which means it went well, I think

Naim was hacking some arduino things together today.

Wayne (new member) is talking about doing sunday BBQs. I am loving this idea. I know we got crafternoon but it is not exactly a competitive thing. rather a synergistic thing.

Paul Breed’s email is down. I might see him tomorrow in Mojave.