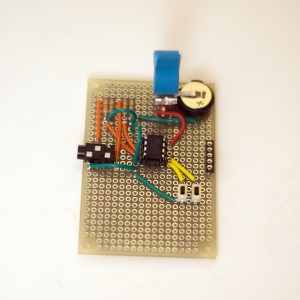 April’s kit of the month build night didn’t quite work out as planned. But it turned out pretty well. The original plan was to build the Loud Objects Noise Toy Kit and build that. It’s a cool noise maker based on a AVR microcontroller, and true to it’s name, it’s LOUD. Unfortunately, the kit is sold out both at both places you can buy it (the Loud Objects store and the Maker Shed). You can buy assembled Noise Toys from the Loud Objects, but the idea was to MAKE something.

Fortunately, the Noise Toy is a pretty simple thing, so we made our own AVR-based noise makers.  The design was a tad more complicated than the original kit – the output has been modified a bit, has an added voltage divider to make the output a little more line level friendly, and it’s all wired by hand since we didn’t have the pretty pre-made PCBs.  It turned out to be a little too complicated, and we didn’t actually finish, let alone get to the planned programming presentation.

A couple folks had to leave before we finished, but after a little troubleshooting, we ended up with four working noise makers!  And a few folks who know how to solder a lot better than they did.

Thanks to everyone who came.  We have enough left over parts to build a few more, so we might do another round, plus I still have that AVR audio programming presentation.  Thanks to Matt for taking pictures, including a snazzy 3D shot: 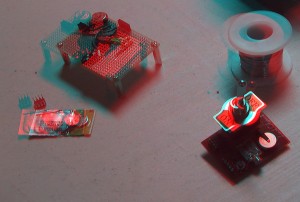 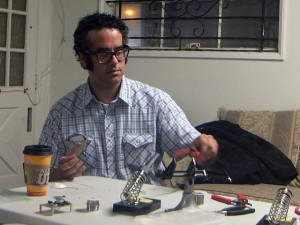 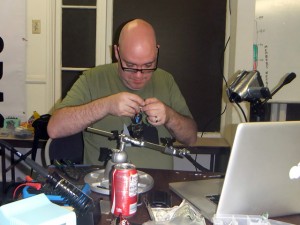