CRASH Space hosted the monthly L.A. MakerBot meeting on Sunday and had a great turnout, including three new visitors.

Brandon brought his Batch XIII bot which included some interesting modifications, including a Lenovo mini computer which he had mounted on the side to control the bot.  He is also developing a modular tray to fit in the power supply area of the MakerBot which includes a smaller power supply, all the electronics, and a LCD status display.

Brandon recommended putting ReplicatorG 0017 on the CRASH Bot, and boy was he right – it’s a great update and greatly simplifies the build process.

A first-timer named John was curious about printing RepRap (Darwin) parts, so I downloaded the set off Thingiverse and printed one as a demo of what was involved.  It was bigger than previous parts that have been printed, so it was a good test for the MakerBot as well.  It took a couple hours to work out the quirks of the new RepG, but the resulting print was pretty awesome: 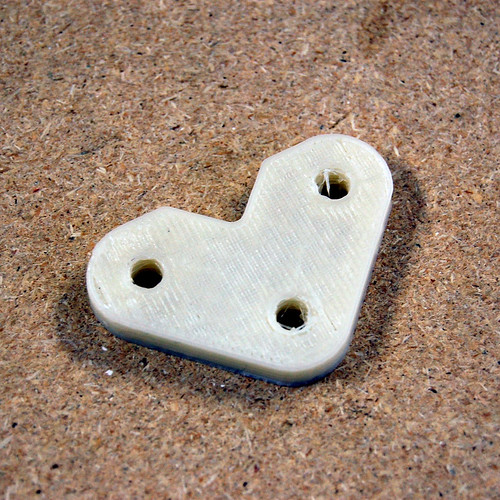 The sides are very straight, and the top and bottom are nicely filled.

I’m going to try one of the bigger cube-like pieces next, but I think the bot is working pretty well now.  I still need to put together an operation checklist on the wiki because there are still a few quirks to deal with (mostly with the software).  And Chris and I are going to try and swap out the control computer because the crashes are getting more frequent. (Though strapping a computer to the side now seems like a really good idea.)

We will be having a class on basic MakerBot operation in the near future, as well as classes in 3D modeling for MakerBot printing.